As Robert Fisk has said the Egyptian people who are putting their lives on the line to call for the end of the Mubarak regime have shown immense courage, matched by the complete cowardice of the American government that for thirty years has propped it up, with Hilary Clinton calling for “restraint” and Obama saying essentially nothing.  The regime is  far from standing by. Despite talk of “dialogue,” it is doing all it can to quash the resistance, shown by its organizing brutal attacks on Tahrir Square and its detaining and attacking many foreign journalists.  Clashes are even worse outside the square.  The protesters are exhausted and covered with bandages, those who are still standing, while some are dead and hundreds are wounded, some seriously.  Fisk thinks the army is with the anti-Mubarak forces – he has seen them refusing to attack protesters, weeping, and embracing them -- and he believes they will have a decisive effect, as indeed the army alway can in cases of popular revolts.
There are two important Arabic vocabulary words from the past two days in Cairo:  بلطجية (baltagiyya) and إحتكاك (iḥtikāk).  First baltagiyya, thugs.  That’s the word used for the pro-Mubarak groups in heavy leather jackets and sweaters, armed with knives, live ammunition, sticks, stones, and yesterday entering Tahrir Square on horseback and camel attacking, beating and in some cases killing the protesters. They’re reported to be plainclothes police or paid supporters of the regime bussed in from all over.  And they have been armed in some cases with machine guns, which reportedly the army have taken away from them.


What was a remarkably peaceful movement of millions in the streets has turned lethal, apparently upon a directive from the regime after Mubarak’s speech announcing that he would not run again next September but making no other real concessions.  The specter of Tiananmen Square has arisen.  This could be a bloodbath.  And Mubarak’s recently appointed crony prime minister Ahmad Shafiq, speaking to local journalists, gave us the other important Arabic vocabulary word:  iḥikāk, “friction"  --  the dismissive noun he used to describe the murderous, lethal clashes brought on by the baltagiyya.  State television claims the demonstrators are all foreign agents, and shows images that imply nobody is really left in Tahrir Square, when in fact there are thousands still there ready to fight to the end.
Speaking to Amy Goodman of Democracy Now Noam Chomsky has called this uprising “spectacular,” and said it is one of the greatest popular resistance movements in history.  And in sheer numbers it must be, with millions involved in protest throughout this country of eighty million for ten days now, non-stop, day and night.  The world watches and continually tweets about events in Egypt.  Ironically, though Mubarak beats and arrests journalists, closes the Al Jazeera offices and fills state television with  false reports, this mass Egyptian intifada is perhaps the most reported, instantly seen and commented upon mass resistance movement in history.  All you have to do is access a computer and open tabs for Twitter, Google, Al Jazeera English and Al Jazeera Arabic, and you're there. 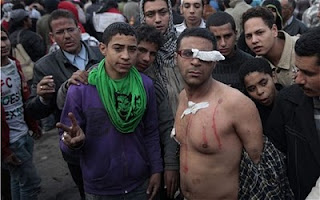 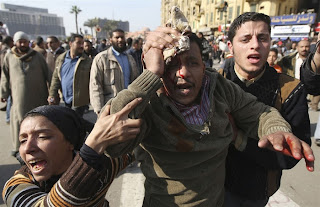 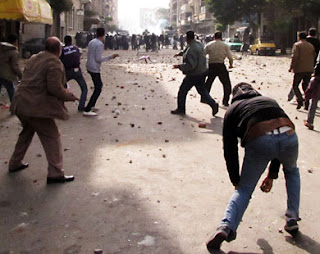 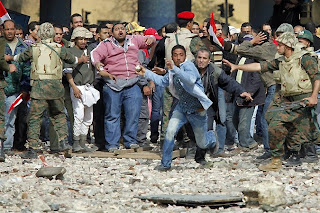 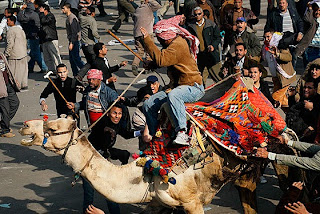